I recently was in Nice, France on holiday and I was fortunate enough to visit the Musee d'Art moderne et d'Art contemporain. Luckily for us they had an amazing exhibitition from the Artist Robert Longo whose work I had not followed until now. The exhibition runs from June 27-November 29 2009 if you do get a chance to visit you will not be disappointed.

Robert Longo was born in Brooklyn, New York in 1953, he still lives and works in New York to this day. His wife is the German actress Barbara 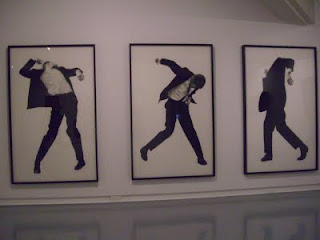 Sukowa whom he married in 1994. Longo had a childhood fascination with mass media which is a great influence in his work. Most of his works are done with charcoal and graphite, interestingly, and drawing remains his favourite form of self-expression. His many works are both diverse and important. Installations, photographs, sculptures, drawings as well as his music, video and film have all had a huge impact. He is well-versed in history and cultural categories. His drawings, sculptures and films provide an essential contribution to what one can call "the historical paintings of our time". He became famous in the 1980's for his "Men in the Cities" scenes, which showed sharply dressed businessmen writhing in contorted emotion. 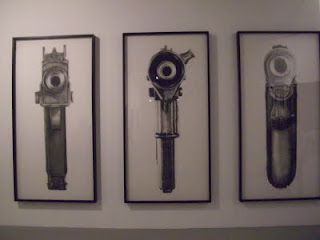 He has had major retrospective exhibitions at the Los Angeles County Museum of Art in 1989, the Museum of Contemporary Art, Chicago in 1990 and a touring exhibition throughout Japan in 1995. The 1989 catalogue referred to Longo "As one of the most provocative artists in the US". During the 1980's he also directed several music videos including New Order's "Bizarre love triangle" and "The One I Love" by R.E.M. He also directed the cyberpunk movie Johnny Mnemonic, starring Keanu Reeves.

He always wears black. Anyone who enters his light-filled, loft-style 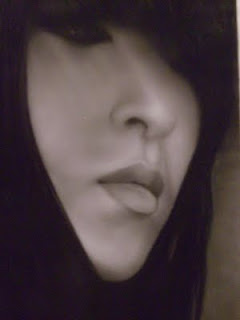 workspace in Manhattan can see that wearing black is more to do with his art than anything else. The air is thick with dust from the pieces of charcoal, graphite and black crayons he uses and it settles on absolutely everything. It is no wonder he now presents his works behind glass as soon as it leaves his studio headed for exhibitions and collections.
A truely inspiring artist! His attention to detail is phenomenal, his drawings have an almost photographic quality. Its near unbelieveable to conceive his great works are created out of simple charcoal and graphite.
Robert Longo is certainly one of my favourite contemporary artists.
See a video of Longo on tube: http://www.youtube.com/watch?v=UgXr9TfuXow
Posted by Niki Makeup at 09:36